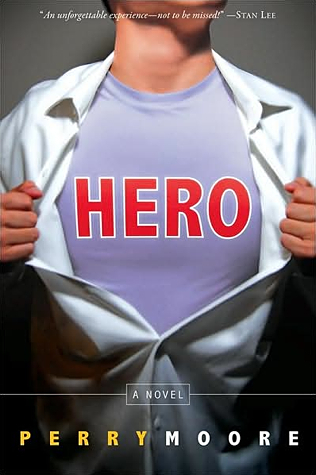 Thom Creed keeps a lot of secrets.  First, he has special powers.  This is troublesome because of his father’s falling out with the Super Hero crowd – and that most of the world blames him for the failed rescue that lost so many lives years ago.  Thom doesn’t really understand those powers though..  and isn’t really sure how to go about learning how either.  His second big secret is that he is gay.  His father would not approve.  Even more – Thom’s biggest fantasy crush is on Uberman – one of the great Super Heroes.  Thom gets his chance to try out for the Super Heroes (and meet Uberman, sigh) and he has to keep that a secret too.  Soon it’s apparent that some villain is trying to kill the Heroes.  Thom and his team will try to stop it from happening – which gets complicated when Thom’s mother returns suddenly, his father’s history gets involved and there is a potential love interest to protect!

This book is a little bit older, and wasn’t even on my radar.  However, conversations with a family member recently brought this book to my attention.  This book really meant something to him, as he happened to read it while coming to terms with his identity.  He’s not a super hero, but he is gay and I love him very much.  So it was important to me to read this book as it is important to him.

I can see why he liked this book so much.  It has so much going on!  There’s action!  There’s romance!  There’s family drama!  There’s humor!  There are touching moments!  There are costumes!  OK, I’ll stop there.  Honestly though, this was a creative way to explore identity.  Nearly every character has an alter-ego and everyone has secrets. We are focused on Thom, of course, but everyone is working to be comfortable with themselves, their identity as a hero, and all that comes with that (namely, the powers – but think about the metaphor here).

As I mentioned, this is an older book.  Therefore, there are some outdated terms and especially homophobic slurs that are used in the book.  But this is a place where the gay superhero overcomes the homophobia (and not everyone he meets is homophobic, by the way) and has the chance to save the world.  And I think that is important.

One thought on “Book Review: “Hero” by Perry Moore”