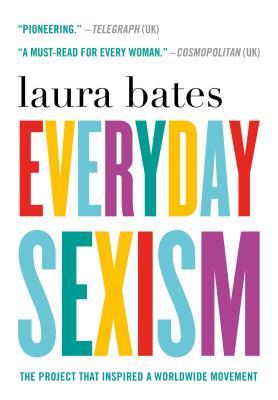 Wow.  This book is exactly what I was looking for.  Laura Bates began the ‘Everyday Sexism’ project a few years ago, as a way to compile people’s stories in an effort to show how deep and wide spread sexism really is.  It also is a way to show victims of sexism, sexual assault, etc that they are not alone.  The project began online, and continues there at EverydaySexism.com.  You may add your story and/or read the stories that others have shared.

So why was this what I was looking for?  It has helped me feel like I am not alone.  It has helped me to realize that what has happened to me in the past does not define me or my future.  My heart broke over some of the stories, and felt uplifted for others.  I felt a weird sense of shock and vindication with all of the cited statistics included at the front of each section.  I loved that she included stories from many different ethnic groups, sexualities, gender identities (even hetero-cis-male) and nationalities to really drive home that sexism is everywhere (just in case you were somehow having trouble locating any instances of it in your daily life).  It really is a terrible thing to realize that nearly every woman you have ever known has experienced this in their lives.  It could be that they were told in some way that they were valued less than a boy (don’t make a fuss), that they weren’t capable of pursuing their dreams (girls aren’t engineers; are you going to give up all that training when you get married and have a baby?), that they are just objects on this earth for the pleasure of men (cat calls, groping)…  and that is before we talk about sexual assault and rape – and how that is under reported, under penalized in the justice system, and often blames the victim (what was she wearing? how much did she drink? it isn’t rape if you’re dating/married).   And what about men?  Why do we call it babysitting when the father is caring for his children?  Why can’t we just assume he’ll be doing some housecleaning – and it isn’t some sort of “favor” to his partner?  AND THEN if you include LGBTQ* or Persons of Color — it just gets so much worse, because somehow their intersectionality gives more power to the perpetrators (which is total utter bullshit).

It makes me angry.  I’m sure it makes many of you angry as well.  The book finishes with a section on Women Fighting Back.  This was incredibly hopeful for me.  I was glad to hear of campaigns that are making a difference – including the Everyday Sexism campaign to get Facebook to remove photos of abused/assaulted women from the site.  I liked reading the powerful come-backs women had when cat called or harassed.  We still have a long long way to go…  and this government administration aside, I think we’re making some movement toward equality.  Who knows?  Maybe this government administration is the common enemy we need to gather more support for closing the gender gap?  (Though I’d really not credit them with ANYTHING).