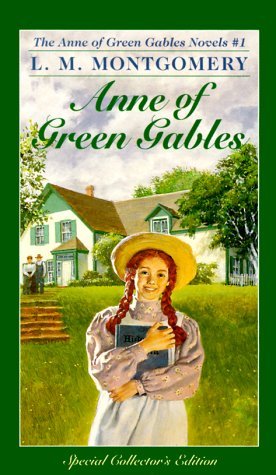 Anne Shirley is one of a kind.  When we first meet her, she is eleven years old and adopted by Matthew and Marilla Cuthbert (even though they had asked for a boy orphan).  Anne has a wonderfully active imagination, which tends to get her into some unusual situations.  This first book of the series follows Anne through her schooling – all the way through earning her Teacher’s Certificate.  She makes deep, lasting friendships as with Diana Barry and holds a major grudge against Gilbert Blythe.  She wins over adults all over the town of Avonlea, and she definitely won over this reader.

I had never read this before, nor had I watched any of the film or TV adaptations.  All I knew was that this was a story that everyone seems to love.  And now I know why.

Anne is just so darn charming!  There is such an innocence and simplicity woven through this story that it feels like such a comfort to get lost in her story.  There are parts that are so awkward and funny that I found myself grinning like a fool and loving it.  There were also some very sad parts that I really had to push through because I had a feeling Anne would come out all right.  She is so positive and creative!  I thoroughly enjoyed her long-winded rambling speeches that would go from topic to topic and how exasperated Marilla would become from listening to them.  This book really is a treat.

I’ll admit that I was a little skeptical, and thought that one book would really be enough for me.  However, I am now seriously considering reading on in the series.  I’d love to know what happens next at Green Gables!  (Don’t tell me!!)