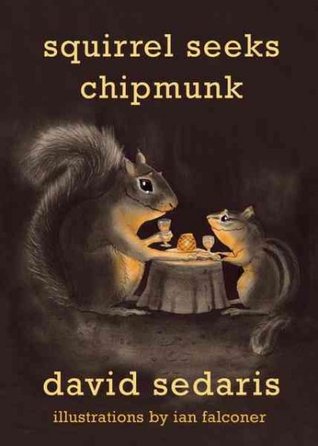 Oh my goodness, this was hilarious.  I recently traveled down to Cape Cod for the Massachusetts Library Association Annual Conference.  I was going to be alone in the car for over 2 hours each way.  I got all sorts of giddy excited when I started to think about the audio books I could listen to!  This was choice number one, because I really needed to read this book.  Let me tell you a very short story.

I LOVE the used book sale at my library.  It happens twice a year, I go faithfully every year, and always leave with a stack of books.  I bought the paperback of this book in the most recent book sale, which was awesome.  Until I got home and realized that I had purchased the hardcover in the previous book sale.  Yep.  I did that.  And now I read the book by borrowing the audio from the library.

ANYWAY, this book was hilarious.  I was awake way too early dealing with traffic that I usually never have to endure and I was laughing out loud.  Is there any better way to drive the highway?  Elaine Stritch is one of the narrators, and she is wonderful.  I love the personality she gave the characters with her voice!  The other narrators included Dylan Baker, Sian Phillips and the author himself.

Oh, and the stories!  They are a series of stories, not interconnected in any way, that all feature animals as the characters.  Some of these animals are complaining about waiting in line, some are in inter-species relationships and others are …  well, they are all very different.  And each sheds a little light on the human condition, or at least on a situation that the reader may be all too familiar with.

I had just a couple stories left when I arrived at the hotel, so I read them (from one of my personal copies) later that night.  Reading the printed version allowed me to flip back through and take in Ian Falconer’s illustrations, which are well worth it.  As it was clear that I really, really wanted to read this book – I’m happy to say that I finally did.