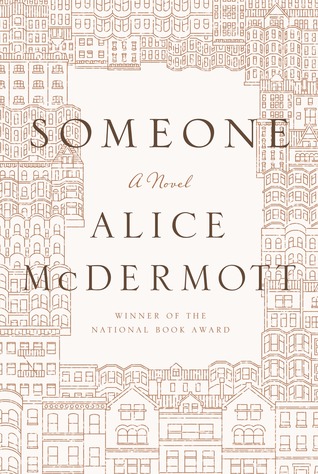 Marie is ….  Marie is….  Who is Marie?  Marie is the ordinary looking Irish girl with big glasses growing up in Brooklyn.  She is the sister of Gabe, who was a priest for a bit.  She is the girl who had her heart cruelly broken by the first boy she fell for.  She is the daughter of the father she adored and the cold mother she was scared to lose.  She is a mother and a wife, a caretaker and caregiver.  She is a nobody, she is every woman, and she has had a life worth telling about.

The story is told through a series of memories that generally (but not always) follow the timeline of Marie’s life.  She is recounting the memories for the reader as an old woman looking back.  Therefore, there is not an abundance of plot per se, but rather a lush expansion of character and place.  I became completely invested in Marie’s life, as the losses and joys common to most were beautifully rendered in this gorgeous writing.

Would I have picked this book up on my own?  I really don’t know.  It did garner some attention and award nominations when it was published a couple years ago, which always makes me curious but I probably would not have picked this up.  The book club at the library chose this one though, so there you have it.  I was about half way through when a meeting I had to attend was changed to make it impossible for me to attend the book club discussion on this though – but I was too far gone in Marie’s life to just put the book away.  I was compelled to finish, and I’m glad I did.

One thought on “Book Review: "Someone" by Alice McDermott”