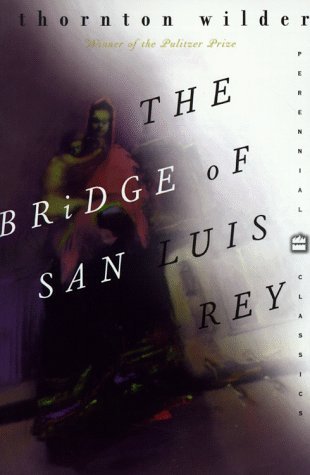 In the early 1700s, Peru was still a frontier-land.  There was a small foot bridge that crossed a narrow deep valley in the Andes, a bridge made of woven vines and had stood since before the Incas.  That is, it stood until the day it broke – plummeting five people to their death.  The lone witness to the tragedy was Brother Juniper, who then thought that this would be the perfect example to prove the existence of God’s will.  He undertook a study of the five lost souls to determine if they deserved to die by an act of God, or if it was an accident and God plays no part in deciding such things.

It is an interesting question to explore in a novel, and the way Wilder did it here earned him the Pulitzer in 1928.  It is broken down into five parts:  the first describing the bridge and the tragedy that follows as well as describing Brother Juniper.  The next three parts carefully tell the story of the bridge’s victims while the final part reintroduces Brother Juniper and concludes the story.  I must say that the part that tells the story of Esteban really got to me the most.  There was something so beautifully sad about Esteban and everything that led up to the bridge.

The five lives taken on the bridge were from all different parts of Lima’s society.  All different goals, all different experiences up to that point and all were taken the same way at the same time.  It does present a case study if you will, for Brother Juniper’s desire to create a proof of faith for the world.

This is a short little book that only takes a few hours to read.  It did take me a beat to fall into Wilder’s writing style, but it is really very accessible and beautiful writing.  I’m glad I read this, and not just because it helps fulfill several reading challenges for me.  In fact I read this as “A Forgotten Classic” for the Classics Challenge….  even though it won the Pulitzer and is really a wonderful read, it has less than 19k ratings on GoodReads.  Hopefully this little post will put it back on people’s reading lists!  Oh, and I love the new cover (see below)!

One thought on “Book Review: "The Bridge of San Luis Rey" by Thornton Wilder”