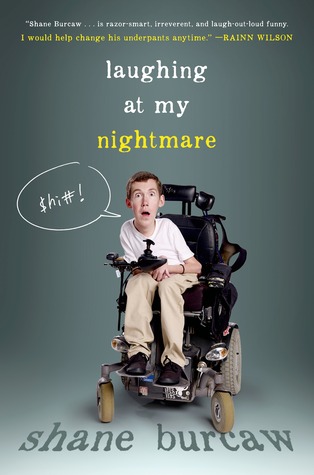 I have wanted to read this memoir since I had first heard about it, and I’m glad that I finally got the chance.  Shane Burcaw is a young man in his early twenties living with Spinal Muscular Atrophy (SMA).  This means that his body lacks the protein needed to build and keep muscle.  Therefore, the muscle that he does have is slowly wasting away and he is becoming weaker and weaker.  He has never walked, and now has trouble chewing or keeping his head in an upright position.  You might think that someone in this situation would likely be depressed and that a memoir written by such a person would be quite a downer.  Wrong on both counts here.

Shane has a wonderfully positive outlook on life: he considers whatever the current problem is and wonders if it will make a difference in ten years.  Most of the time, the answer is no – and so he moves on.  Granted there are issues that will still be a problem in ten years (like how to go to the bathroom, how to eat enough calories to sustain necessary weight, how to gently ask a stranger to help reposition his head when it flops backward uncomfortably) and he deals with those head on and with humor.  Because he has also found that being able to laugh is really the best thing and I have to agree.  What is that song lyric?  “If we couldn’t laugh, we would all go insane.”  (Bonus points if you recognize that quote).

Shane takes us through his memories of growing up, from when the diagnosis was given through his college years.  There was only a chapter or two in the middle that I didn’t quite enjoy as much – he had taken the focus off of him and was commenting on others in a way I felt was disrespectful.  Burcaw does acknowledge that he might be kind of an a-hole here though, which might be an attempt to make up for it…or at least lets us know that he realizes he’s walking a line in this chapter.  He comes right back for the rest of the book, and I really enjoyed getting to look at life from his perspective.  I wish him continued success in life, with his nonprofit company, and in love!