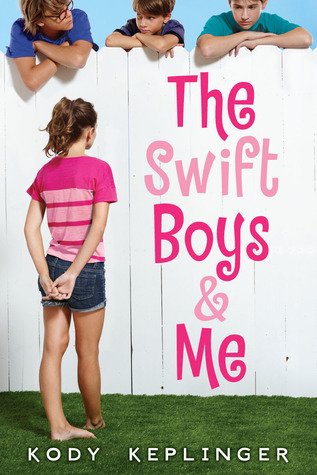 This is a big summer for Nola Sutton and the three Swift brothers from the other side of the duplex – Brian, Kevin, and especially her best-best friend Canaan.  This is her last summer before becoming a teenager, the summer before she & Canaan enter 7th grade, and the circus is coming back to their rural Kentucky town so she & the boys are saving up as much money as they can for tickets.  But then, suddenly one night, everything changes.  Mr. Swift leaves without saying goodbye and he doesn’t come back.  This destroys the boys, and Nola can barely recognize Canaan anymore.  And then she gets a little family bombshell of her own…

I’ve got to say, I really enjoyed this bittersweet middle grade novel that deals primarily with friendships and family relationships.  There are two major events here that rock Nola’s world – events that are common yet still can be catastrophic at this age – that are dealt with authentically and sensitively.  This stuff hurts, it makes you angry, and makes to react in ways you don’t expect or anticipate, but you have to own up to it.  You will wish that everything would just go back to the way it was, but can it?  What would you lose if it did?  Can some things actually turn out okay on the other side?  Growing up is hard.  You are forced to react to so many things out of your control that it is difficult to take ownership of what you can control.

And I couldn’t control my tears as I came to the end of this story.