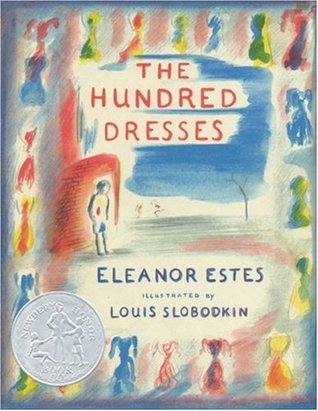 Set around the first World War, this story takes place in a small American town.  Everything takes place around Wanda Petronski – the poor girl with the funny name – but when the story opens, she is already gone.  The girls in her class picked on her constantly, noticing that she wore the same blue dress everyday while claiming to have a hundred dresses at home.  They had picked on her so much (and others had picked on her brother and father as well) that the family moved away to the city where their Polish name would not be so strange… leaving the other girls in the class to deal with their own guilt.

I was interested in reading this book for a couple reasons.  First, it was on the summer reading list for our schools this past summer and I like to be familiar with as many of those books as possible.  Also, this showed up on some booklist I saw somewhere online in which the author said this was one of the saddest children’s books she’d ever read.  Saddest?  Naturally, I became even more curious about this book.  This is also a Newbery Honor book, and that settled it.

And yes, this is a very sad book.  We don’t see the victim’s perspective, but rather the perspective of one of the tormentors.  This tormentor, Madeline, did not actively bully the poor girl, but instead stood aside and did nothing in her defense for fear of becoming a target herself.  But we see Madeline struggle with the guilt she feels and how she knows they were wrong and tries to make it right somehow.  I see why this is on the summer reading list:  it is impossible to miss the anti-bullying message, though I do wonder if this may seem a little dated to today’s students?  I hope they can see past that and take it to heart.

4 thoughts on “Book Review: "The Hundred Dresses" by Eleanor Estes”